Memories of my GAA club by Pat Culhane 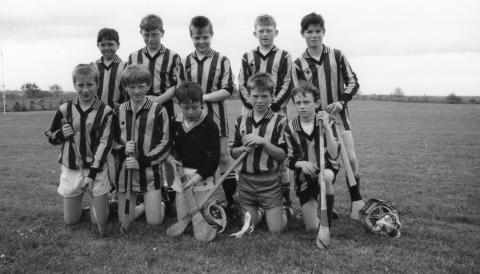 Memories of my GAA club: Come on Ahane the spuds are boilin

It was 1987 when I played my first game of hurling in Mackey Park, Ahane; the day before I made my First Communion at Lisnagry N.S. The next day I bought my first helmet from the proceeds. Ahane GAA club is based in the beautiful parish of Ahane Castleconnell, nestled in the very northeast of Limerick by the river Shannon. Growing up there you’d be told about legendary hurlers such as the Mackeys, the Herberts and Scanlon families (among others) winning county championships and All-Irelands with Limerick in the 1930’s and 1940’s; a team known as the ‘Mackey Greyhounds’ because of their ferocious athleticism.

I remember being told how Mick Mackey – the most notable hurler of his generation in Ireland – would swiftly hide the sliotar, by placing it under his arm and break free from the bunch of players still looking for it on the ground. Maybe this is true; I like to think it is. One piece of folklore that is true is that at every Ahane game played, to this day, the famous chant - “Come on Ahane the spuds are boilin’” – is shouted with pride by players and supporters alike.

Greg Mackey (son of Mick) told me that as children, the lads (brothers Mick, John Paddy and James/Todsie) would play hurling with the Scanlons and others on the village (Castleconnell) green, known as Bradshaw’s field. Their mother, May (nee Carroll), would step outside of the family home across the road, while cooking the dinner, and shout come on in the spuds are boilin to let them know that their meal was ready. While researching this article, local GAA enthusiast, Billy Connolly, told me that in February 1941, Paddy Mackey passed away from pneumonia at the age of 22. Along with John and Mick (captain), he was a member the Limerick panel that won the 1940 All-Ireland senior hurling championship, beating Kilkenny in the final. As a mark of respect, his three brothers didn’t play a game of hurling for the rest of the year, an uncommon move at the time.

Since its founding in 1926, Ahane GAA club has had much success in all codes and Scór. It has produced many county, provincial and All-Ireland winners, all-stars and more. I was lucky to be part of the 1998 panel that won the first county senior hurling championship in 43 years. I’ll never forget the sheer jubilation of young and old alike, as we made our way around the parish on an open-top bus; there must have been a dozen bonfires ablaze. I've rarely felt such out outpouring of emotion; one of sport's true gifts! For all the joy that comes with winning, it’s not the pursuit of medals or trophies that define the character of our club! It is the love and respect that people have for our games, our culture and each other.

I had a wonderful upbringing in Ahane, with most of my spare time spent with friends in the club. Like every club, Ahane has its challenges – relying on the volunteer efforts of a few – to keep the show on the road. Despite all of this, Ahane’s spuds are still boilin’, as is reflected on our club crest. I’m privileged to call myself an Ahane man.