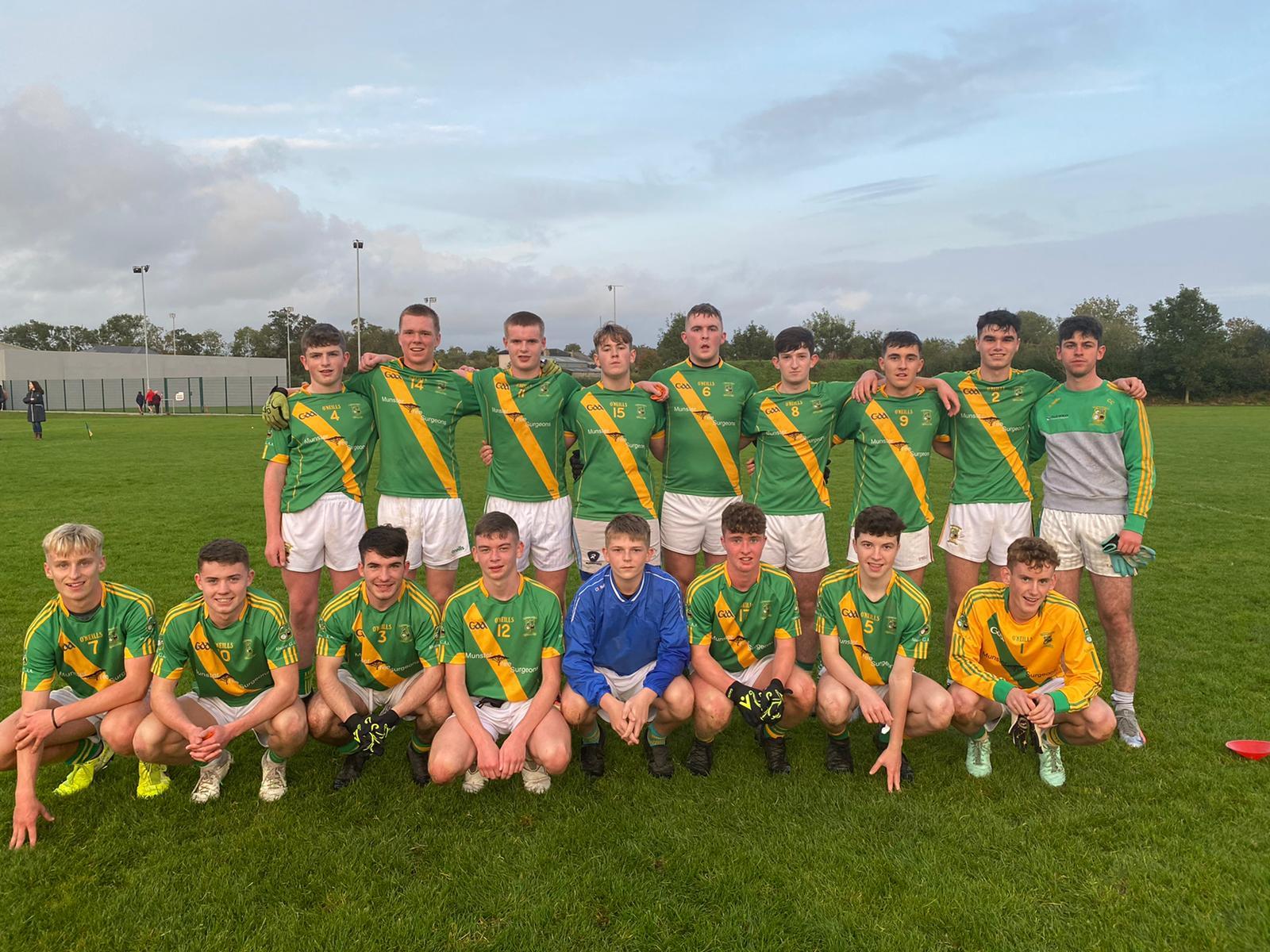 Minors are off and running

Last Friday evening, the Ahane minor football team got their championship campaign off to the best possible start with a comprehensive team display in a victory over a keen and youthful Shannon Gaels outfit.  From the throw-in, Eoin Madigan delivered a long ball into Ruairi Cronin who fielded, rounded their full-back and scored a wonderful goal in the opening seconds.  This set the tone for the opening minutes of the contest with the Ahane contingent working hard around the middle to win ball and block out attacks while allowing their own set of forwards to keep pressure on their opponents while picking off some early points.

However about ten minutes in, there came a pivotal moment in the game when a penalty was awarded to Shannon Gaels for a foot-block following some very enterprising runs through the middle.  While Evan O’Leary should be congratulated on saving the well-struck penalty, it was his immediate reaction to get up again and block the point-blank rebound which really shook Shannon Gaels and allowed Ahane to continue their early dominance once again.  A second goal from Ruairi Cronin, followed by a goalkeeping error after Eoin Madigan let in another long ball had this game well within Ahane’s control at halftime with a lead of 3-05 to 0-02.

Some astute positional switches by the sideline management helped Ahane maintain control down the middle of the pitch throughout this game, with the captain Brian Murphy leading by example from full-back in attacking everything that came his way, ably supported by Kevin Morrissey in front of him.  Ahane continued to create excellent chances by either delivering quick ball into the full-forward line or by carrying the ball through the hands of support runners.  One of the scores of the match came this way when after some lovely link-up play, Ruairi Cronin played in Craig O’Connell who then, after turning his man inside and out, calmly stroked over a wonderful point from out on the right.  Even naming some players here does an injustice to the rest of the team who were very balanced on every line throughout the pitch, with scores coming through hard-work and running as well as frees created by overloading Shannon Gales players when in possession.  The free-taking of Ciaran Coulter was a sight to behold for those in attendance, and goals in the second half from Ruairi again and Peter Donohoe capped a fine team display with a final scoreline of Ahane 5-09, Shannon Gales 2-03.

There is a county quarter-final on the horizon now for this team and the coming weeks will be planned in detail by the fine management team of Denis, John, Kevin, Joe, Sean, Greg and Jimmy.  They would like to extend their thanks to those within the club who helped out with Covid Supervision, Car Parking and Umpiring, as well as the players and their parents for committing to this enterprise for the current season.