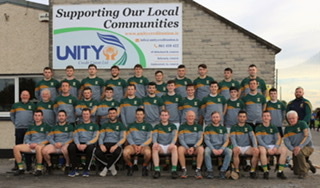 Ahane and Adare travelled to Claughaun to play the Senior Premier Relegation Fina sunny Sunday afternoon. This was a must win game for both sides as the losers of this game would be relegated to Senior B.

Ahane hit the ground running with their first score coming the 2nd minute as Niall Moran got his first point in the game. Ahane missed a goal chance within the first minute as Paul O’Halloran’s shot hit the post and came back out. Tom Morrissey got Ahane’s next score heading into the 3rd minute with William Brennan getting his name on the score sheet 3 and a ½ minutes into the first half. Ahane had all the ball and had the strong wind at their back. Super performances from Padraig Harnett, Evan Enright, Andy Rowsome, Paddy Morrissey, Colum Carroll and Ciarán Barry in Ahane’s defence made live very hard for Adare. Adare got their scoring off to a start in the 7th minute and got their next score 50 seconds later. A brilliant score for Ahane came from Niall Moran who was on fire on Sunday afternoon, Niall took a sideline cut and struck it beautifully over the black spot, a serious piece of skills witness. Adare did use the ball very well and they took their scores when they got the opportunities. At the first water break the score was Ahane 0-07 Adare 0-05. Ahane took more advantage of the gale force wind in the second quarter of the first half and they created another goal chance but it was saved again this time by the Adare keeper, who made some good saves throughout the game. Ahane got points from William, Tom, Niall, and Paul O’Halloran in the second quarter of the first half to keep the Ahane scores ticking over. Adare however continued to take their points and they went for a shot on goal just before half time but Ahane keeper Adam O’Brien made a great save and ensured the ball didn’t hit the back of the net. Half time the scores stood as Ahane 0-16 Adare 0-08.

The second half started and Tom got Ahane off to a flying start as he scored a point from a free. He went on to get the next two points to ensure Ahane maintained the strong lead they had built up over the first half. Adare continued to plug away at the score and for each score Ahane got Adare got one in response. The score was Ahane 0-23 Adare 0-12 at the second water break. It was a tough physical battle at times with referee Johnny Murphy having to show a number of yellow cards to both sides over the sixty plus minutes. The Adare keeper made another great save after a great piece of play that started with Tom and Adam Murrihy who got the ball to Paul O’Halloran, Paul then passed it off to Willie who took on the shot but it was saved wonderfully and cleared out the field. The action was non stop at the other goal mouth as Adare had a close range free but it was saved by Ciarán Barry and cleared. However the danger was not gone as Willie Griffin of Adare won the clearance and took a shot at goal but again Adam O’Brien ensured that the ball didn’t hit the back of his net. Just went the Ahane lads thought they could take a breather Adare got another close range free and this time it was the hurley of corner back Andy Rowsome that got to it and pushed it out of a 65’ which Adare put wide. Niall and Willie got a point each to keep the gap at 10 points. Adare got another shot on goal but it was again saved this time by the posts, the rebound was saved again by the Ahane backs, however Johnny Murphy penalised Padraig Harnett for a tackle on the Adare forward and awarded Adare a penalty. Adare put the penalty into the back of Adam’s net. As the clock ticked on into injury time Adare got another close range free and this time the ball landed in the back of the net. Ahane did get two more points from frees from Tom and the game ended on a score line of Ahane 0-28 Adare 2-17.

A great performance to round of the 2020 season. A great boost for the club to remain playing at the highest senior level with the best teams in the county. On behalf of the club we want to thank Eamonn, Conor, Sean, Darren, Jack, Johnny, Brian and all of the backroom staff and management team, for all their time, dedication and hard work they have put in with the lads this year. A big thank you also to Mary Hassett for ensuring the lads were always well fed after training! To the lads themselves we want to thank them for all the work and time they have put into this year, especially for the year that was in it. To anyone that helped out in any way shape or form we want to thank you as without your continued help and support we wouldn’t have the club we have today.