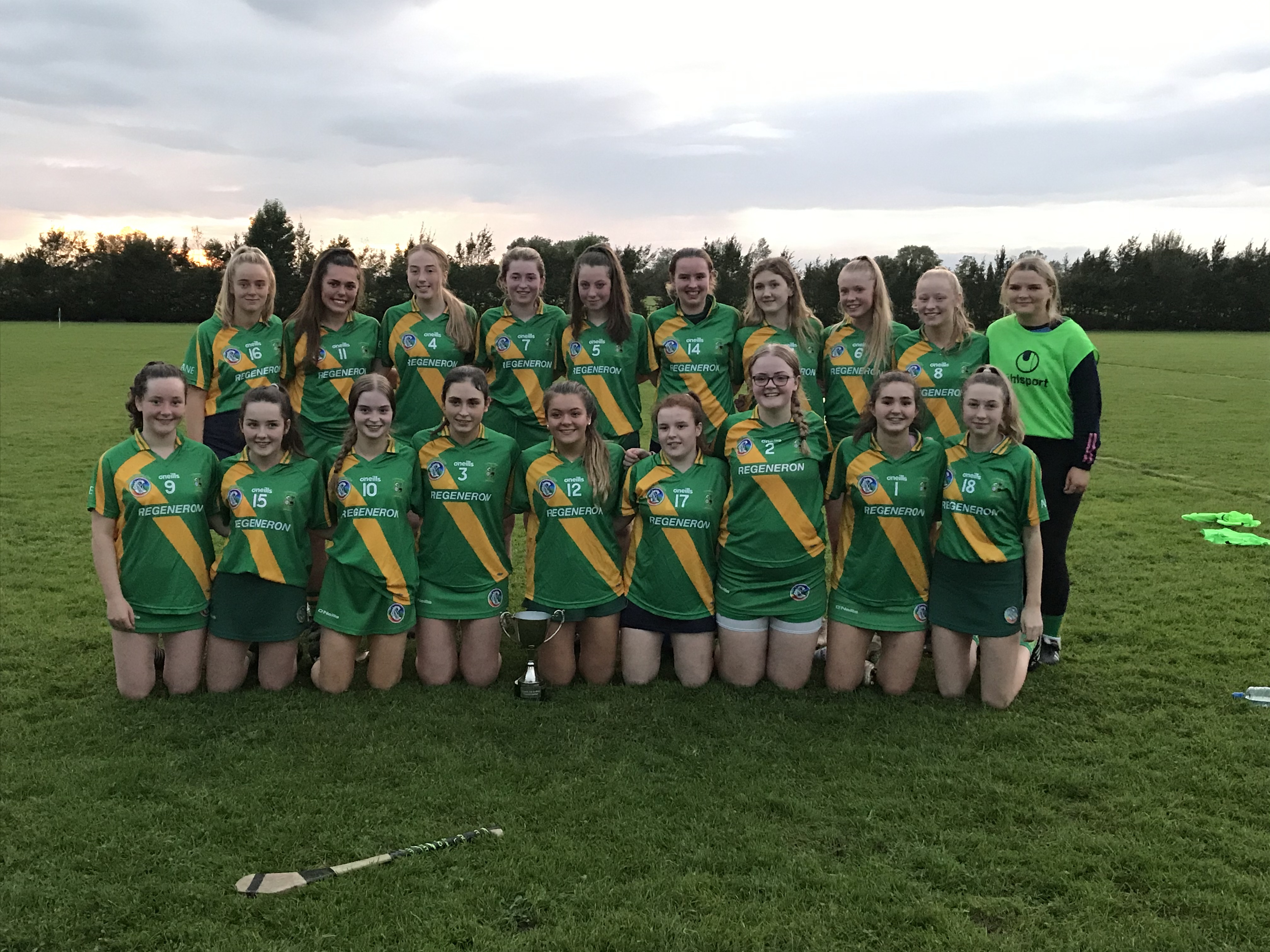 Ahane travelled to Boher yesterday evening to play Murroe/Boher in the Minor 12 a-side Co Final. On a lovely evening for camogie both teams were well up for the challenge. Ahane were first off the mark with a goal from a 45 from Fiona Herbert, Fiona then scored a point after controlling the ball excellently on the hurley. Throughout the game Ahane’s work rate was second to none and their hooking and blocking was top class. Murroe/Boher got their first score in the game after four minutes after some good interlinking play.

Fiona got on the end of a great play in from Sarah Cosgrove and she struck it over the bar for our second point and her third score of the game. Firing in all cylinders Fiona scored her third point two minutes later after a stunning pick up by Sarah that would have been at home in Croke Park. Ahane continued to play great interlinking passes and their fourth point started all the way back in their own defence as a Rachael Donnellan cleared it up the field to Éle Madigan who looked up and played a perfect pass to Ella Ryan who struck it over the bar.

The Murroe/Boher keeper had a great game and made some fine saves and clearances throughout the game. Both sides are to be commended for their super fielding of the ball, the ball was plucked from high in the air on a number of occasions throughout both halves. Fiona stepped up again in the 13th minute and popped over a free for her 6th score of the game. Murroe/Boher got their 2nd point of the game from a free in the 14th minute but a minute later after a blistering run by Cliodhna Twomey through midfield Ahane got their second goal as Cliodhna passed the ball to Sarah who looked up and spotted Ella who slotted it to the back of the net. At the first water break it was Ahane 2-05 Murroe/Boher 0-02. Murroe/Boher we’re quickest off the mark in the second quarter and they got the first score. Ahane’s next two scores came from Fiona and Cliodhna. Murroe/Boher got the final score before half time leaving the teams as Ahane 2-07 Murroe/Boher 0-04.

The second half started and Murroe/Boher at the advantage of the slight hill. They scored the first two points of the second half and they put pressure on the Ahane backs, making a number of runs through the middle to try for goals. Ahane stood strong and made some good saves throughout the half to try keep the Murroe/Boher attack at bay. Seven minutes into the half and Fiona put the ball over the bar again from a free, Cliodhna added to her personal tally as she scored another point. Molly Hussey and Éle Madigan covered every piece of grass in Boher on Tuesday night, Molly plucked the ball out of the sky on a number of occasions and played pinpoint perfect passes each time. Niamh Brennan was introduced as a substitute half way through the second half and within 30 seconds of being on the field she had scored a point, she then followed that up with two more points and some serious pieces of skill and talent when getting possession of the ball and when dispossessing the opposition. Murroe/Boher continued to fight hard and they never once gave up they scored two more great points and they broke through the Ahane defence and got a smashing goal. But a Ahane were the stronger team on the day and came away with the win. Final score was Ahane 2-14 Murroe/Boher 1-08

We are incredibly proud of the girls for all they have achieved and we want to say a massive thank you to their management team of Anne Madigan, Vera Mulcahy, Kevin Donnellan, Eugene Ryan, Fiona Oliver and Mary Cusack on first aid and Covid Supervisor. We appreciate all the time, effort, hard word and dedication ye have given especially this year. Big thank you to Mary Hassett for taking the photos last night and to all the girls parents for your continued support and encouragement of the girls and the club we really appreciate it! Thank’s to Morgan O’Sullivan who refereed the game!

Final thanks has to go to Murroe/Boher for a very sporting game you are a seriously talented group of girls with a bright future ahead of you!