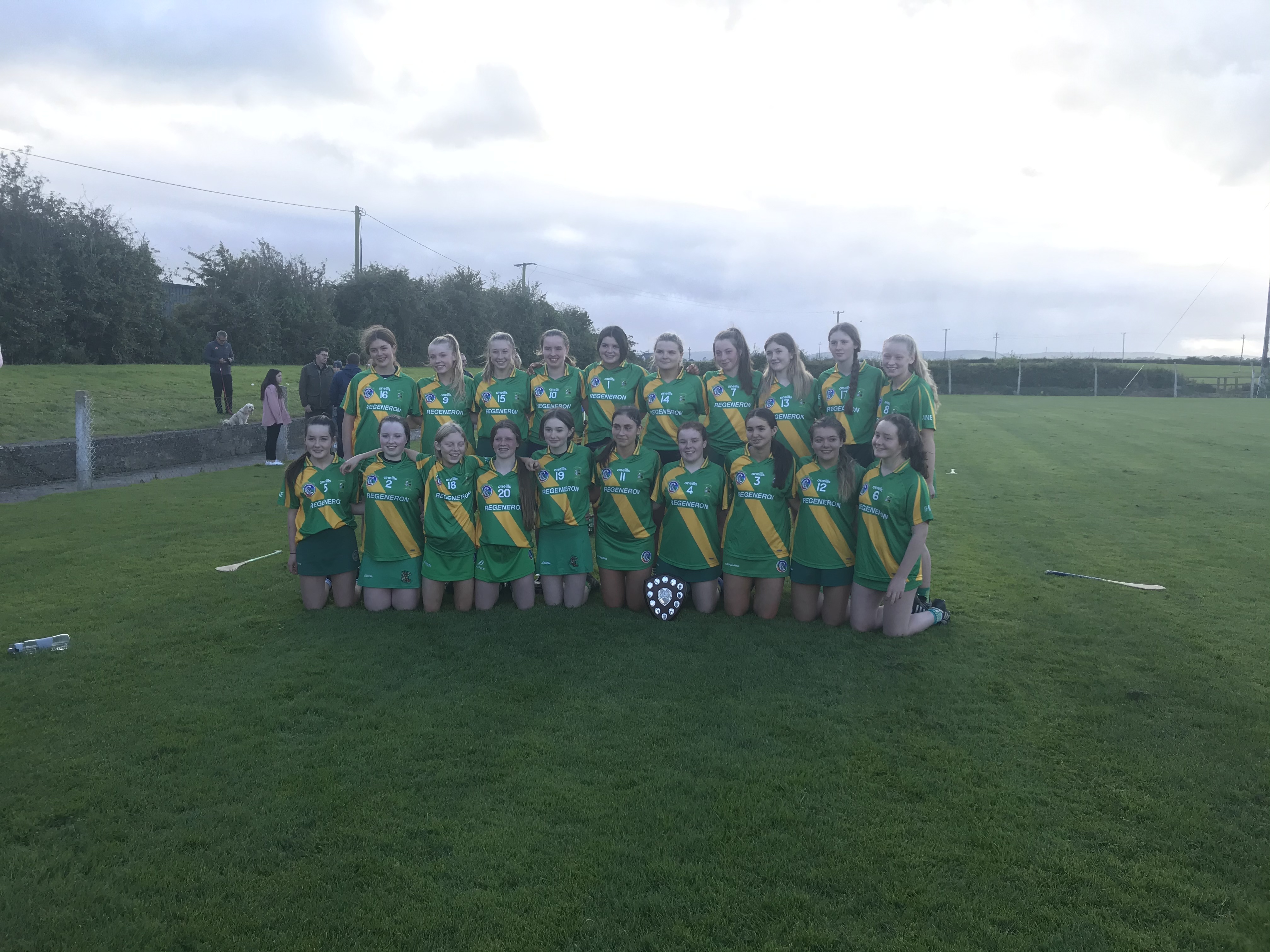 Ahane and Killeedy travelled to The Bog Garden Rathkeale to take each other on in the U16 A Plate County Final. The sun shone brightly as referee Morgan O’Sullivan threw the ball in and the action got underway. Ahane hit the ground running and got their first point in the 3rd minute from Ciara O. Ahane’s first touch was excellent throughout the game and there was some serious control and fielding of the ball from both sides throughout. Molly controlled great ball in the middle of the field alongside her midfield partner Éle who won fantastic ball and came out with the ball from various rucks. Molly would get her name on the score sheet in the 10th minute as she scored Ahane’s 4th point, Niamh scored Ahane’s 3rd point after some really good interlinking team play. Ahane’s forward line of Lucy, Lauren and Sarah did well and fought hard to keep the ball in the forwards. Lauren and Sarah both created great scoring chances that Ahane took well. Again Ahane’s fifth score came from another good piece of team play that started with their captain Lucy who had a great game, she passed the ball to Ciara K who popped the ball over the bar. The score at the first water break was Ahane 0-05 Killeedy 0-00.

Killeedy hit a purple patch in the second quarter and scored 1-03 with no reply. Ahane fought hard and there was great tackling, hassling and work rate in all areas of the field. The Killeedy goalkeeper is to be commended for her saves throughout the game, she denied Ahane three sure goals in the course of the game. Niamh scored a point for Ahane to level the game and at half time the score was Ahane 0-6 Killeedy 1-03.

The second half got underway and the Ahane defensive lines were put under pressure immediately with Hazel having to make a very good save 30 seconds into the half. Killeedy got a point from the rebound. Ahane began to get on top again as they scored points from Niamh, and they got their only goal of the game from Molly who never gave up and got the goal. Both sides would trade points before the second water break the score was Ahane 1-10 Killeedy 1-06. The game ended in a nail biting finish with some serious defensive play from Aine at corner back who along with Rachael, Aoife, Ella, Abby, and Ciara W did all they could to keep Killeedy at bay but in the dying moments of the game Killeedy got through the defense and scored a goal to leave only a point between the teams. The referee blew the full time whistle seconds after the puck out and Ahane came out winners on a score line of 1-1O to 2-06.

Huge well done to the girls who never gave up and came away with the win, they are a seriously talented group of girls that have a bright future ahead of them! Huge thank you to their mentors, Anne, Eugene, Kevin, Vera, and Fiona for all your hard work and dedication to the girls! Thanks to Mary Cusack for doing first aid for the year and for being one of the Covid supervisors. And finally thank you to Mairead, Deirdre, and Lorraine for being Covid supervisors and for all they have done this year.