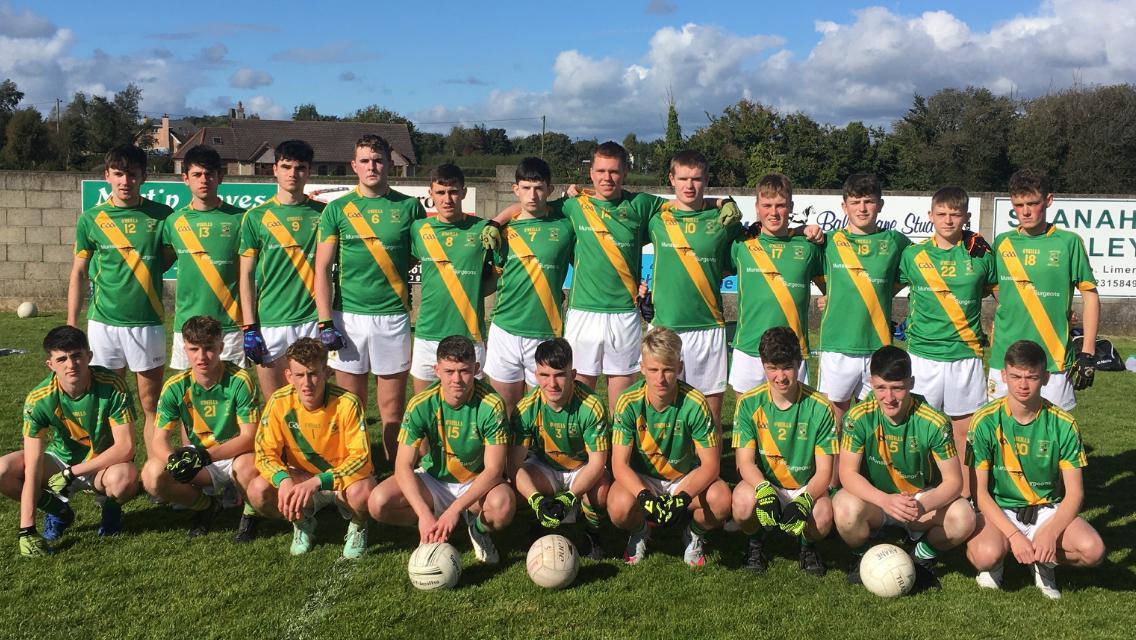 Ahane’s fight and determination win out

And so it was, that the last two remaining unbeaten teams faced off in this year’s Minor B Football County Final.  Ahane and Rathkeale both travelled to Clarina on Saturday afternoon with expectations of finishing what they had started, and the crowd who assembled there to watch on, were in for a treat.

Playing into an influential breeze in the first half, Rathkeale were quicker to settle into their groove and with some great possession football and smart support running, they established themselves within the Ahane half, strung passes together and dictated the pace of the game, which was the ambition of both teams when playing into the breeze.  After a number of minutes, they struck to open the scoring with some great interlinked play, but with a kickout available, Ahane were able to release the pressure time and again through the booming kicks from their goalkeeper Evan O’Leary.

Ahane began to settle into the game and with the aid of the breeze started to spend more time in the attacking half.  Every possession counted and was hard fought for, with Rathkeale displaying a tackling intent that was ferocious in its intensity and forced Ahane continually to move the ball quickly through the hands to find space.  This they were always able to do and used this to score a couple of great team points as well as tap over some frees when the tackling was deemed excessive.  Rathkeale managed to reverse this somewhat and with the referee holding a consistent line on the tackling, they tacked on two frees also to leave the score in Ahane’s favour at the first water-break by 4 points to 3.

At this juncture, the Ahane management team amended the set-up to reflect the playing conditions and tactics from Rathkeale and in this second quarter, it paid crucial dividends as they extended their lead by three points while keeping Rathkeale scoreless to leave it at halftime with Ahane leading by 7 points to 3.  Rathkeale came prepared with a gameplan to stop Ahane getting quick ball into their full-forward line, where their no. 6 dropped back continuously in front of their full-back, but this came at the price of allowing Mark Donnellan more space and time to direct the adapted Ahane plan of working the ball through for the right opportunities.  Indeed Mark was to score 5 points of the team’s first half scores, some frees but also some other outstanding individual efforts where he was simply unmarkable.

There must be a call out here too to the backs division who worked their socks off against a strong and skilful Rathkeale forwards unit, through a display of sheer hard work, hard running and great support play throughout to help each other and work the ball intelligently out of defence and allow the mid-field pairing of Shane and Eoin to do their job of linking up between backs and forwards.

At halftime, it was understood that a four point lead was precarious and would require commitment to the cause above and beyond what had been seen in their previous games.  And this was delivered in spades throughout that second half.  While possession was evenly split, Ahane’s attacks were more incisive with speed and fantastic support running into space, and the defensive unit blocked, harried and disrupted whatever came their way.  This even allowed Ahane to extend their lead against the breeze in the third quarter to take the score to 10 points to 4 at the final water break.

Goal chances, which were non-existent in the first half to either team, were now being created through the fatigue factor of the battle that was on show, but Peter and Ciaran were unlucky not to convert either of these.  Rathkeale did create their own goal chance when quick ball was played through the middle and then overhead to the inrushing corner-forward, but in an outstanding display of absolute fearless commitment, Evan O’Leary came out and flung himself in the way with no regard for his own welfare.  Luckily for Ahane, he got the merest touch on the ball which was enough to deflect it out for a ’45, but he also got clattered in the process and required treatment for a couple of minutes.

The final quarter was played out in front of an enthralled audience with both teams leaving everything on the pitch, and the noise from the supporters rewarding them for everything they gave.  While trying not to single players out, one instance from Shane O’Grady encapsulated everything that the Ahane team stood for on the day – during this last period, Ahane turned over the ball in the half-forward line and Rathkeale took off on their usual quick counter-attack.  Shane started 10 yards from the other side of the ball and while it was being moved quickly through the hands, he chased and chased each and every man that the ball was passed to until it reached the full-forward line where he managed to get in front of the intended recipient and shielded it over the line while collapsing from the effort in doing so.  It was one outstanding example of everything this group of Ahane players have given all year.

Rathkeale continued to plug away at their plan of working the ball into scoring positions, but as both teams understood that a goal would be crucial, Ahane’s tactic of deploying Adam Murrihy in front of the full-back position paid off wonderfully with important interceptions as well as the general disruption when Rathkeale looked up and couldn’t find their target men.  Utilising an extra defender placed more responsibility on the remaining 5 forwards, and again they met this challenge with each possession held on to for dear life, with at worst time being used up, and at best scoring chances being continually created to help relieve the pressure being built up by Rathkeale’s fight-back.

The final few minutes really became a battle of wills as Rathkeale brought the game back to a one-score deficit but again and again, the Ahane players fought, harried, supported and worked their socks off to get possession, retain it and work it forward for the final time with a free kick in front of goal being their reward.  On the resulting kickout, the referee blew his whistle and Ahane were able to start their celebrations.

The two teams scored ten goals between them in winning their respective semi-finals, and while it could be safely assumed in advance that an open scoring game would be available, what we were treated to was a captivating battle between two equally talented football who matched up almost identically in every respect, but which Ahane just about shaded in terms of desire, talent and incisive forward play, while Rathkeale can be proud of the football they played and that they left absolutely everything on the field.

The management team of Denis, John, Kevin, Sean, Greg and Jimmy would like to extend their thanks to those within the club who helped out this year with covid supervision, car parking and umpiring, to the parents for committing to this enterprise for the current season, but most of all to the players for what they gave to this campaign.  There is also a shout out required to all of the football mentors attached to these players in previous years, because while they won four football games in this campaign, there were only a handful of training sessions, and hence it becomes obvious that everything they did on the pitch was a result of past years, plus natural ability, plus the hunger and want associated with all winning panels.

The spuds are warming up nicely.

Big thanks to Jimmy for suppling the report!

Ahane travelled to Banogue to start their league campaign...

Ahane u9 hurlers had their first competitive matches of t...

Ahane u14 footballers took on Bruff in their delayed semi...

Ahane U11 Hurlers kick off their season

Ahane u11 hurlers had their first competitive matches of ...

Our final fixture of the weekend saw our first Junior B t...