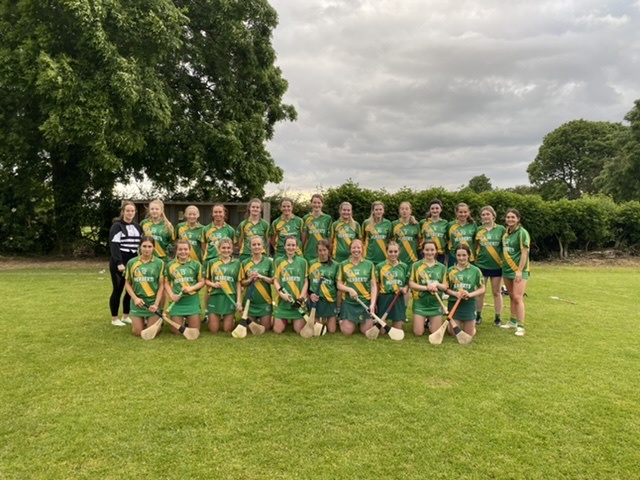 Published: over 1 year ago

Ahane welcomed Killeedy to Mackey Park on Friday evening to play the 3rd round of the Adult Summer Camogie League. On a fine evening with the wind blowing both teams started strongly.

Killeedy were first off, the mark with a point but Aine Reynolds followed soon after to draw the game level, this is how the game would continue, with the teams being level on eight occasions throughout the game. Killeedy got the first goal of the night in the 4th minute but with some great team play and some beautiful passes Ahane levelled the game through points. Serious credit must go to the Ahane defenders along with Audrey in goal who all had a great game and made things very difficult for the Killeedy forwards.

There were some great points from both sides and Ele Madigan got her name on the score sheet in the 18thminute. Killeedy continued to keep their scores ticking over too. There were some fierce battles around the field and no mercy shown by either side. Five minutes before half time Killeedy managed to break through the defence and they scored their second goal. In a fantastic response Aine Reynolds stepped over a free near the dugout side-line, she struck a beautiful free which dipped just under the bar and hit the top corner to get Ahane’s first and only goal of the game, much to the delight of the Ahane supporters. Referee Seamus Hayes blew the half time whistle, and the score was Ahane 1-06 Killeedy 2-04.

Second half started and it was Ahane who scored first as Niamh Brennan who had just been bought on for her first senior game scored a beautiful point, what better way to make your senior debut! This was followed by a serious point from Ann Kennedy which put Ahane a point ahead, but Killeedy soon levelled it again. Killeedy scored a free which put them in the lead again as the whistle was blown for the second water break. First score after the water break came from Ahane’s Ciara Oliver who got her first point in senior camogie again like Niamh a great way to mark her starting senior debut! It was nip and tuck for the next few minutes with scores coming from both sides. Going into injury time the sides were level and the tension was high, both sides did everything they could to stop the other team scoring but unfortunately deep into injury time Killeedy scored their third and final goal of the game. Ahane tried everything to get the ball down to their forwards and into the net, but it just wasn’t happening. With the last puc of the game Killeedy scored a point and won out four-point winners. Full time score Ahane 1-10 Killeedy 3-08.

💃🏻 Victory Dinner Dance 💃🏻Come join us to celebrate our f...

Just over 12 hours until we kick off our 12 Hour Spinatho...

3 more sleeps until our 12 Hour Spinathon 🤩Taking over fr...