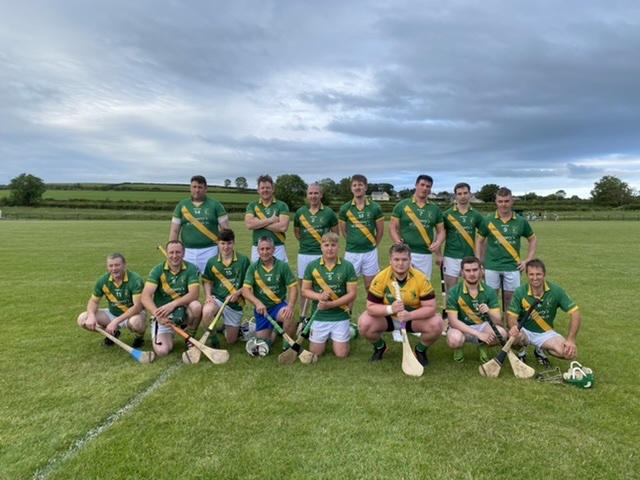 On a wet and wintery Sunday evening Ahane and Claughaun took to the field in Mackey Park. Both teams started well with Sean Madden getting Ahane’s first point straight from the throw in. Claughaun’s first point came with the help of the upright and it was all square. David Kennedy got his first score of the game he would end with 1-02. It was end to end stuff throughout the game with Sean Madden keeping the Ahane score ticking over. Claughaun got some points from play and from frees before Paul Ryan got a beautiful score from a seriously tight angle. At the first water break the scores stood as Ahane 0-05 Claughaun 0-05. We lost Sean Madden to injury just at the water break, but Gearoid Hayes came on and did a solid job in the full forward line. Claughaun got a run on us for the next few minutes and scored three unanswered points. It was Paul Ryan and Seanie O’Connor who got our scores to bring us back level. Podge O’Connor took a beautiful side-line that landed with Seamus Richardson who struck it over the bar. The first moment of magic for us came from David Kennedy who got on the end of a ball in from John O’Connor and buried it into the back of the net. Claughaun responded well with a goal of their own from a free, but David responded with a point. Half time Ahane 1-11 Claughaun 1-12.

Claughaun got the first point in the second half but super sub-Timmy Kennedy only on the field seconds, got the ball in the forward line and smashed home our second goal. Both sides got some more good points, with Liam O’Mara getting his name on the score sheet for Ahane. Just before the second water break Claughaun were reduced to fourteen men after their number four was given a straight red for a tackle on David Kennedy. Paul Ryan and Seanie O’Connor got scores before the water break. Ahane 2-16 Claughaun 1-16 at the second water break. More points from Liam, Seanie and Paul sealed the win for Ahane as the rain flogged down. Full time score Ahane 2-20 Claughaun 1-18 .

🎫 REMINDER 🎫If you want to apply for tickets for the All ...