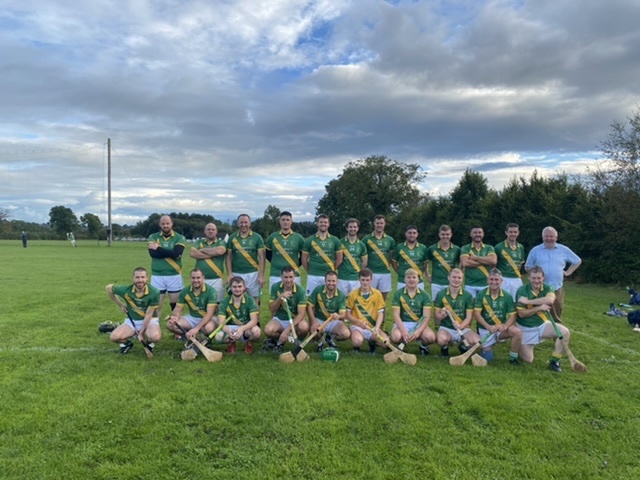 Our Junior B’s first Championship match of the year saw them travel to Boher to take on Murroe Boher on a wet Thursday evening. Ahane started strong with two well taken scores from Podge O’Connor and David Kennedy, before Murroe Boher scored their first point in the 2nd minute. Five minutes in and a great ball in from wing back Tristian O’Sullivan saw David Kennedy gain possession and break through the tackles to get a serious goal and put Ahane up by four points. Seanie O’Connor added a beauty from midfield and Sean Madden added a point of his own to keep the Ahane charge moving. Brian Collins saved a Murroe Boher shot on goal with his head, and we cleared the ball, but Murroe Boher kept the pressure on the Ahane defence but the six Ahane backs along with William O’Leary in goal stood strong. Murroe Boher got a free and tried to sneak it in under the bar but always alert William made the save and cleared the ball out for a 65’ which Murroe Boher put over. Another point from Murroe Boher along with a point from Darragh Madden saw the scores at the first water break stand as Ahane 1-05 Murroe Boher 0-04. The second quarter was all Murroe Boher as Ahane struggled to retain possession. Murroe Boher got three points before Sean Madden got a point for Ahane from a placed ball to keep the Ahane lead. The half time score was Ahane 1-06 Murroe Boher 0-08. Murroe Boher moved up a gear though in the second half as they got a point and then struck for a goal which ended up in the bottom corner. Sean Madden got a great point to bring us back to being one behind and then got a free to level it but Murroe Boher responded with another bullet of a shot that left William with no hope of saving it. Our lads have to be credited in the fact they never gave up and never let their heads drop. Paul O’Connor got a monster of a score to keep us within a two point reach of Murroe Boher, but they continued to keep their scores ticking over. We were awarded a penalty and Sean Madden stepped over it but his effort was saved by the Murroe Boher keeper and we got a 65’ out of it, which was slotted over by Sean. Second half water break the scores were Ahane 1-10 Murroe Boher 2-09. The final quarter saw Ahane leave it all out on the pitch as they got points from Madden and Paul O’Connor to level the game and then go one point and then two points up. Much to the delighted of the Ahane supporters the referee blew the full time whistle and the scores were Ahane 1-14 Murroe Boher 2-09. A serious performance from the Ahane lads who left it all out on the field and pulled the game out of the fire in the final fifteen minutes.

U9s finish up their football season for 2021

Our u9 footballers finished up their 2021 football season...

Many thanks to Peter Nash who visited Ahane for a second ...

Our u6 hurlers had their final hurling session Monday eve...