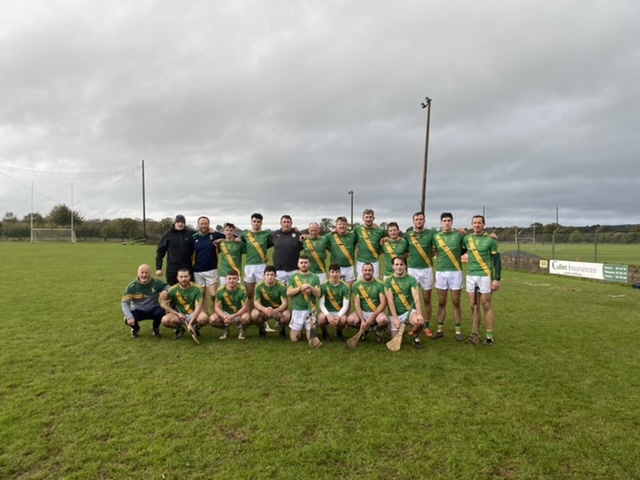 With a definite chill in the air and a strong wind blowing Ahane took on Monaleen in the Relegation Semi Final. Ahane with the advantage of the strong wind got their first point from none other than Ollie Moran, who played a stormer at centre back. Peter Donohoe got Ahane’s second point thirty seconds later. Peter himself had a great game at wing forward, causing fierce trouble for the Monaleen full back line all day. Monaleen got a point of their own before Killian Enright got his first point of the game. Liam Ryan, Diarmuid McCarthy and Johnny Meskell got the next three scores, Johnny getting his from a placed ball to put Ahane 6 points to 2 ahead. Ahane’s 7th point came from a lovely ball in form Johnny to Peter who made no mistake in popping it over. First water break Ahane 0-07 Monaleen 0-02. The gap was pushed to six as Johnny put another free over the bar, but Monaleen got a free of their own to bring it back to five. Two more points were scored before half time, one from Johnny again from a free and one from Monaleen who put a close range free over the bar. Half time score Ahane 0-09 Monaleen 0-04. Monaleen brough the game back to a five-point margin before Seanie O’Connor was pulled down just inside the square and Ahane were awarded a penalty. Accurate as ever Johnny buried the penalty into the bottom right corner of the goal and Ahane were 7 points to the good. In fairness to Monaleen the responded well and got the next three scores but cool as ever Killian Enright got a point to settle the Ahane charges before the water break. He got another beauty of a point just after the water break before Monaleen got a point of their own. It was once again Ollie Moran all the way from centre back that got Ahane’s next score to ensure that there was still a two-goal gap between the teams. Johnny got another free and popped it over before Monaleen got their 11th point. As the game was nearing its end, Monaleen got a close range free, and had no other choice put to go for it. However, James Hayes had other ideas and made a super save to deny Monaleen and he won a free out. It was as good as a goal for Ahane as the crowd and the lads got a huge lift! Ahane did get a second goal curtesy of Killian Enright who’s hamstring was being held together by tape, that didn’t stop him though as he made sure that the rebound landed in the net along with himself. The full-time whistle blew shortly afterwards, and it was an Ahane win with the final score being Ahane 2-24 Monaleen 0-11. A serious performance from the lads who have retained their Junior A status for next year! Huge thank you to their management Phelim Macken and Colm Barry, first aid Brian O’Mara and Physios Jack Murray and Rory O’Donnell. A huge thank you also to lads for everything this year and for doing the club proud, it is a huge achievement for the club to field three adult teams.