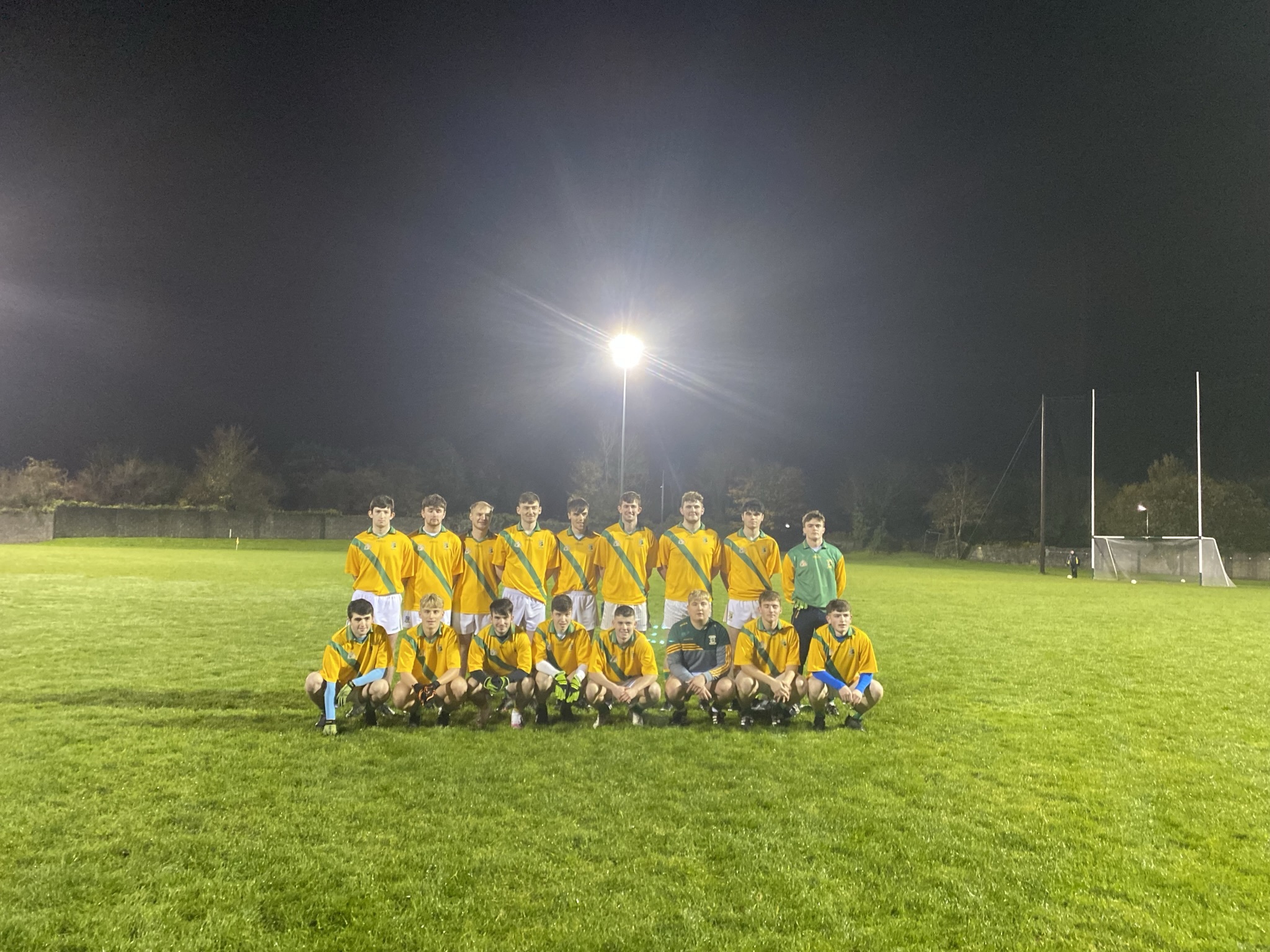 It was a quick turnaround for a number of our U21 lads as they togged out again on Friday evening for an 8:30pm throw-in in St Pats. They took on Belville Gaels in the opening round of the U21 B Football County Championship. The weather was marginally better on Friday evening but there were still a number of heavy showers, and the wind was seriously strong at times. We started with the wind in the first half and took full advantage of it. Belville got the first score of the game, but this would be the only time in which they were lead the game. Our first score came from the boot of Mark Donnellan, which was followed by Peter Donohoe scoring a point off his left. Six minutes in and Mark scored his second and our third point of the game, and our confidence was on the rise. Belville got a point from play in the seventh minute to bring the gap to one point before Mark got another seriously good point to keep us two points clear. Evan Power took on shot on goal but was denied by the post, not happy with being denied the goal he got on the end of a great move and scored a point to put us three up and motoring well. Padraig Hartnett showed that he doesn’t just score in the hurling, but he’s well able to pop them over in the football too as he came from wing back to get on the end of another good passage of play and get the score. First half water break score Ahane 0-06 Belville 0-02. The second quarter got underway and with it came the rain. Not to be deterred by the rain Mark slotted over three frees in as many minutes to keep the Ahane score ticking over. Belville Gaels refused to give up though and made life difficult at times for our defence who collectively had a fantastic game. But Belville did manage to get through as they kicked a high ball in and it was punched into the net, leaving Luke no hope in goals. They got a point two minutes later and the gap was down to three points. However, we never panicked and continued to play good football, our interlinking play and decision making was top class along with our passing game. Mark got another point from a free, before we were denied two more goals in the space of thirty seconds. Huge credit is due to the Belville Gaels keepers who made some fine saves throughout the game. We did finally manage to break the Belville defence as Peter Donohoe scored a cracker of a goal, again showing that it’s not just in the hurling that he can score goals. Half time score was Ahane 1-10 Belville Gaels 1-03. Belville started the second half brighter as they scored two points, their second one came from a good save from Luke in our goal. We made a run through the middle and Aidan Carroll was bearing down on goal but again credit where it is due the Belville keeper made a serious save and denied us another sure goal. Belville got another point from play before Padraig got on the ball from the kick out, made a run down the side-line, spotted Gavin Rowsome who made no mistake slotting it into the back of the net. Peter Donohoe scored another point, again similarly to twenty-four hours previous in the hurling he scored this point off balance. Our next point came from Ronan Fox, who again got on the end of a well worked piece of play. The second half water break scores were Ahane 2-12 Belville Gaels 1-06. Mark added another to his personal tally of the night as he scored another free. As we were nearing the end of the game it appeared a game of soccer had broken out as Josh O’Keeffe dribbled the ball from midfield, passed it to Peter who passed it to Gavin who just sliced it wide, it would have been a serious goal if it had gone in! The ball never left the ground throughout the move. Evan Power scored another point for us in the 28th minute, but Belville scored a point of their own. Belville continued to put in serious effort and tackles and were rewarded for their efforts as they scored their second goal in the dying minutes of the game. Brian Murphy saved the first shot, but Belville were quickest to get to the rebound and they buried it. Unfortunately, for them it was too late as the referee blew the full-time whistle and the score was Ahane 2-14 Belville Gaels 2-07. A superb performance from every single one of our lads.